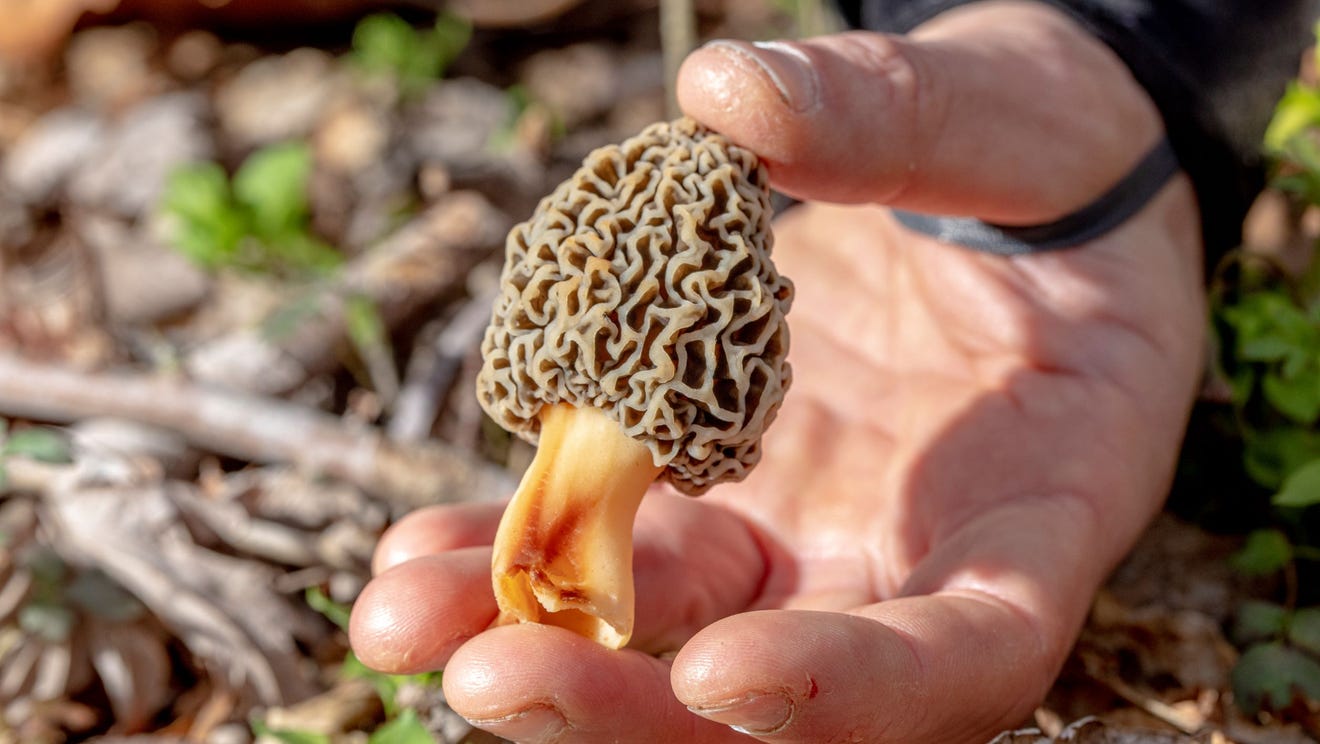 It was 7:45 on a Saturday morning when I got the text. “There are morel mushrooms today,” it read.

For a week, I had been texting with Andrew Armstrong, the chef at Bounty on Broad restaurant in Memphis, about the status of this year’s wild morel mushroom crop. After six days of anticipation, these gems of the fungi world had popped forth from the ground. 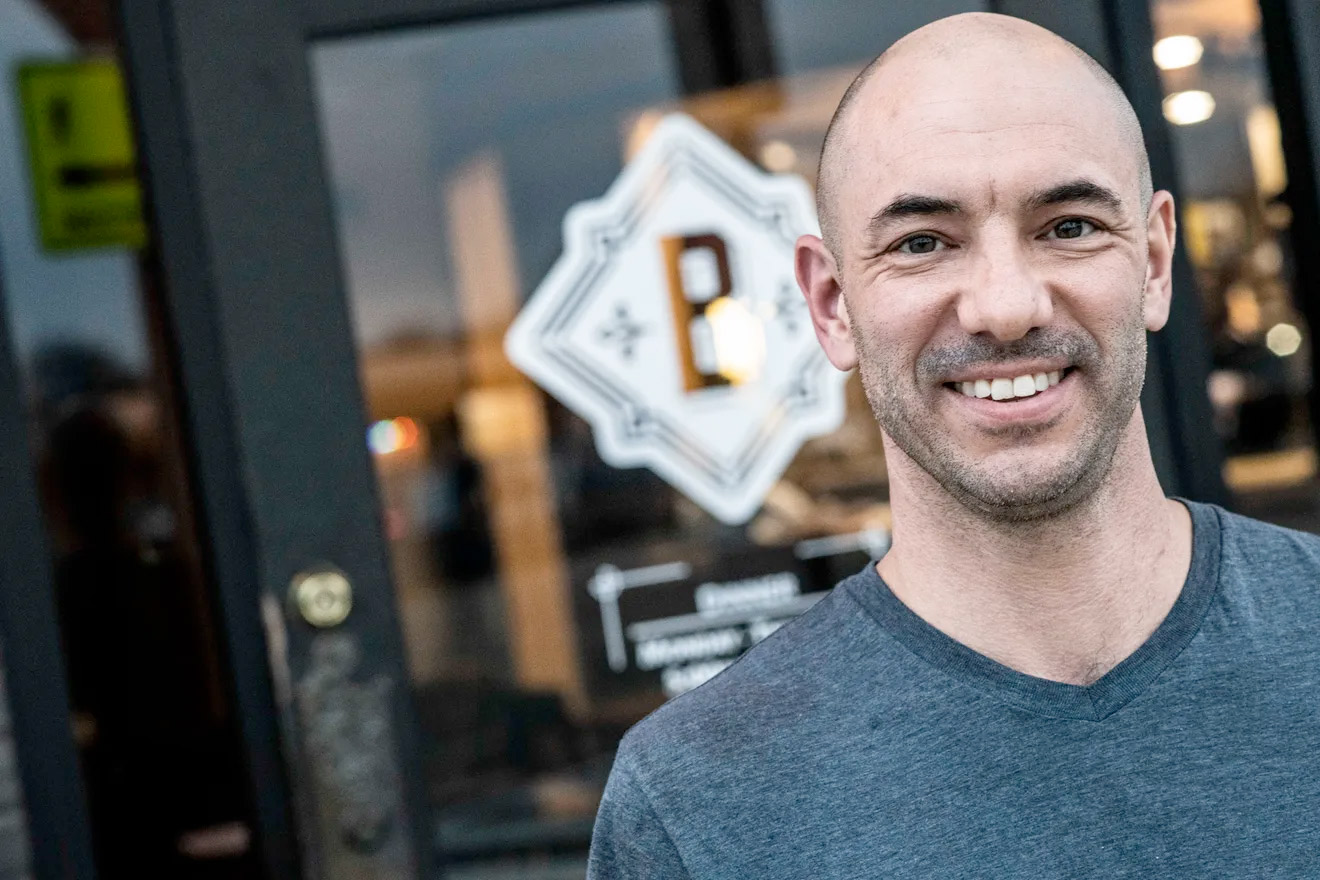 Bounty on Broad has a new chef and a new menu. Here’s what to expect and our review

I almost didn’t order the Short Rib Beignets at Bounty on Broad. That would have been a mistake.

Light and pillowy beignets are stuffed with braised short rib meat that is so tender it almost melts in your mouth. I expected a heavy dish when I read the description of this appetizer on the menu, but these beignets defied my expectation. They made the ideal starter to our meal, and I will order them again on my next visit.

It’s a new item on the menu, as are most of the dishes now being offered at this Broad Avenue Arts District restaurant.

Bounty on Broad is entering its third chapter, this time with chef Andrew Armstrong at the helm of the kitchen. 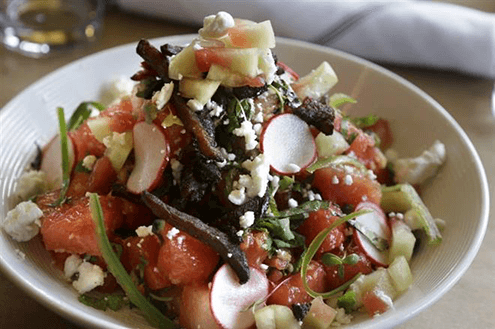 Shaking things up at Grove Grill and Bounty on Broad

Chip Dunham’s given name is Jeffrey, just like his dad, Jeffrey Dunham, the chef/owner of Grove Grill. In fact, “Chip,” is short for, as it often is in these cases, “chip off the old block.”

One could make a pretty good argument that this is certainly the case for Chip, who was lured back to Memphis from Charleston about a year ago to take over the kitchen at Grove Grill….

Answering a call: This Memphis chef is helping restaurants in his hometown of Brownsville

When Russell Casey got a call from a friend in his hometown of Brownsville asking for help, he didn’t think twice before saying yes.

Casey is the chef of Bounty restaurant in the Broad Avenue Arts District in Memphis. His farm-to-table concept is struggling like all restaurants across the country right now, but he is finding creative ways to stay afloat and keep his team employed.

How Bounty on Broad made its comeback

Sales had plateaued just above expenses, and the primary owner of the barely profitable restaurant, Michael Tauer, had decided to move to Boston.

Before moving, though, Tauer sat down with Mason Jambon, who had recently become the director of operations for Loflin Yard and Railgarten, and asked Jambon what he would do to improve the restaurant… 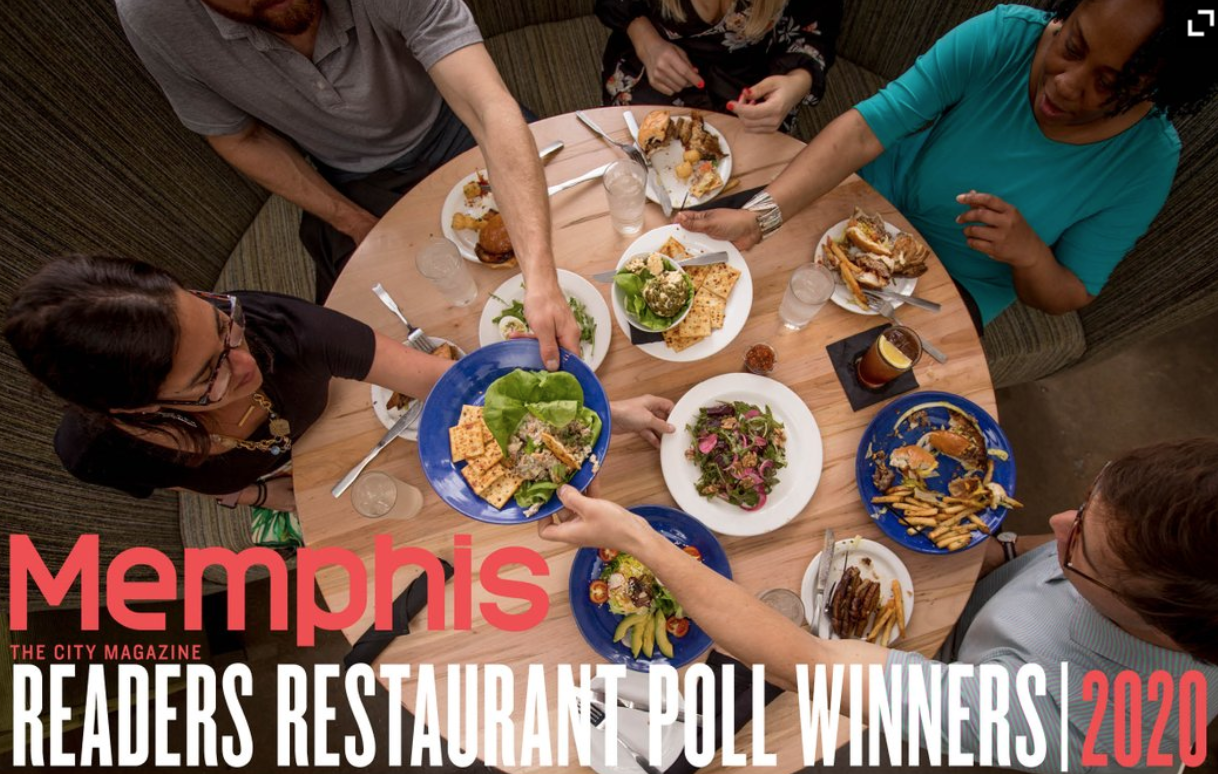 Presenting the Winners of the 2020 Readers Restaurant Poll

Long-time readers of Memphis magazine will notice a new designation this year for what we’re calling, a little cheesily (but this is a food poll, so: pass the cheese), Super Stars. These Super Stars are first-place winners who received a third or more of the total votes in their categories. When Memphians like a place, we really, really like it. Ever read a social-media comment thread about sandwiches in this city? We take this stuff seriously… 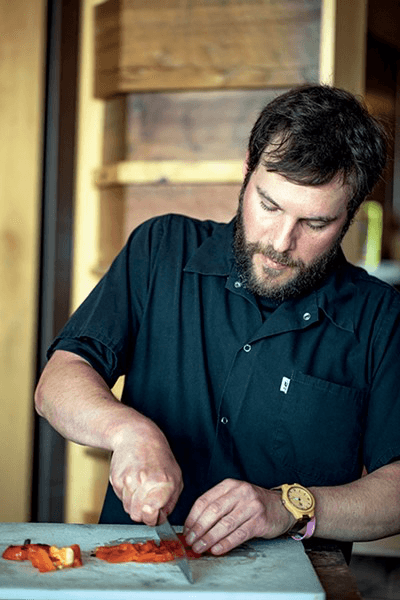 By Jennifer Biggs of The Commercial Appeal

When Bounty on Broad opened in October 2014, it was, for all practical purposes, a restaurant for then-chef Jackson Kramer. In the previous 12 years, he’d been with Wally Joe (the chef and the restaurant), then took over at Interim in that space when Joe left and took his name with him. After running the kitchen for four years, he left in 2009 to go to Asheville, North Carolina, returned to Interim in 2011, and stayed until Bounty, thought to be his restaurant home, opened…. 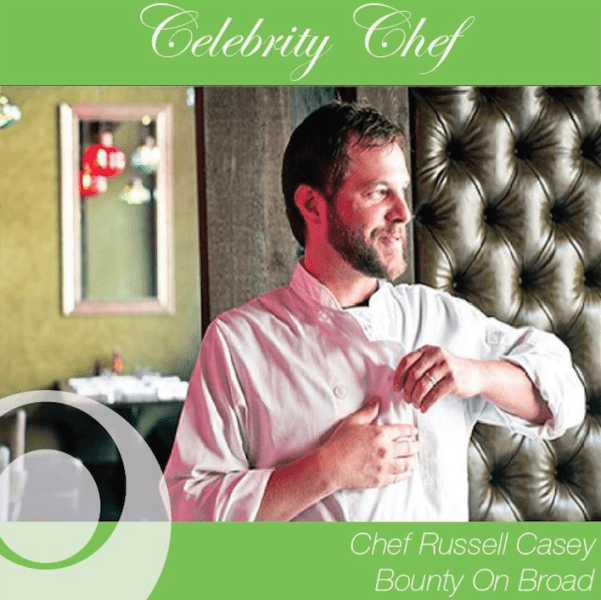 We know that cancer care is much more than just your treatment. At West Cancer Center, you have access to comprehensive and individualized wellness and support resources from diagnosis all the way through survivorship…. 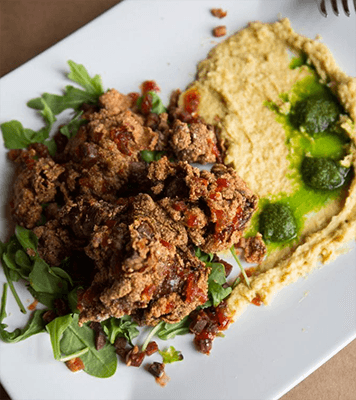 From Blight to Bright in Memphis

On a Saturday in November hundreds of people of all ages savored the mild afternoon in a downtown Memphis hangout named Loflin Yard. Set on nearly two acres, there was something for everybody. Families clustered around bonfires in a sprawling yard. Adults lounged in rocking chairs sipping hot apple cider spiked with bourbon…. 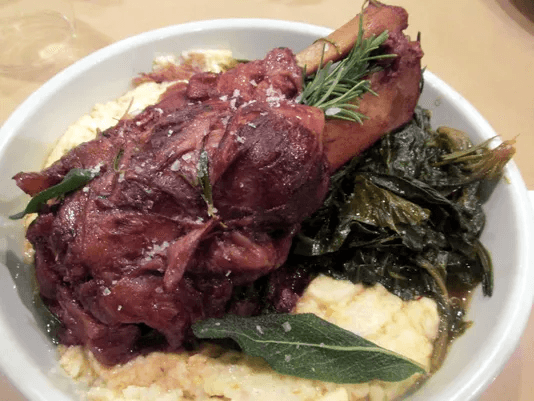 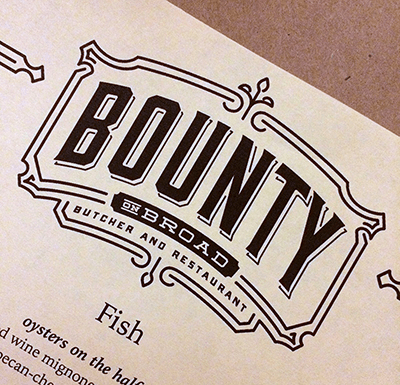 Why Bounty on Broad is a MUST

Broad Avenue is adding an entire new layer of culture to Memphis—from local art galleries and artisan shops to state-of-the-art boutiques and restaurants. The pinnacle of such a timeless, yet trendsetting, design can be attributed to the brilliance of Chef Jackson Kramer and restaurateur Taylor Berger. They completely renovated a two-story, 100-year-old dry goods store into one of the most sought-after dining experiences of its kind in Memphis, Bounty on Broad….. 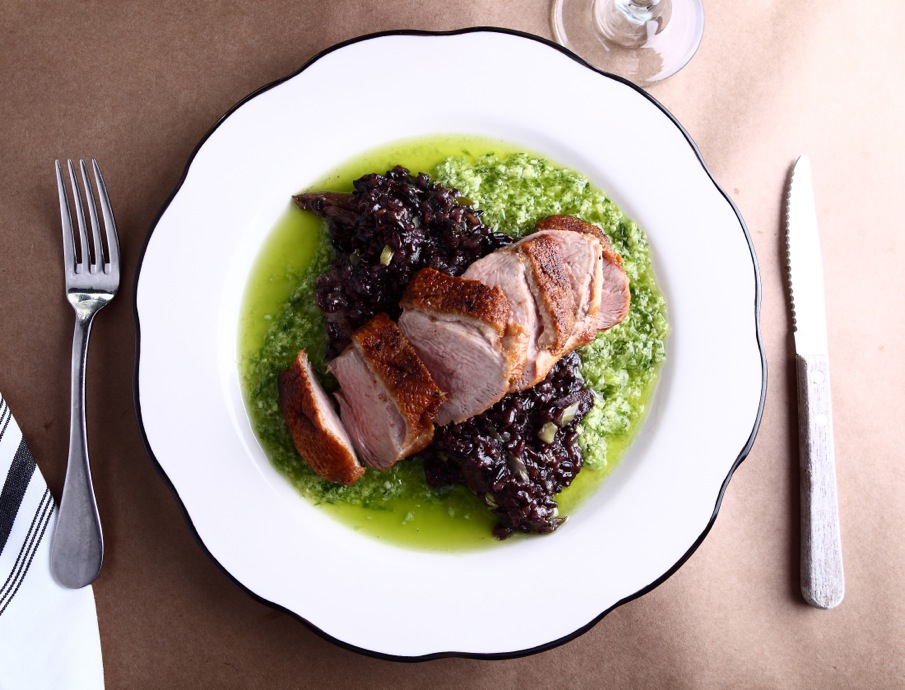 A row of mostly empty storefronts less than a decade ago, Broad Avenue now anchors a revitalized arts district. One of its latest additions is chef Jackson Kramer’s field-to-fork restaurant, housed in a two-story building that’s simple but elegant—like Kramer’s food. The dishes—creamed kale with fried grits; quail stuffed with cornbread and andouille sausage—are served family-style, so bring friends. Or don’t, and eat as if you did…. 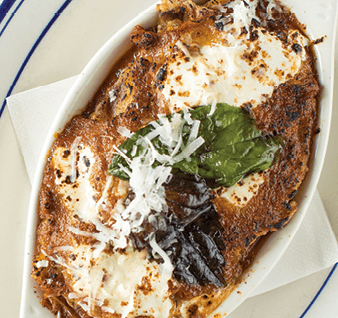 Top 10 dishes for 2018
Eggplant Lasagna at Bounty on Broad

When Kunal Jadhav’s mother visited from India, Jadhav, who loves to cook and pal Russell Casey, the executive chef at Bounty on Broad, decided to honor her with a special dinner. Eggplant lasagna, one of the duo’s collaborative dishes for the event, was exceptional, earning a permanent spot on the restaurant’s regular menu…..